Bellapais
Home To The Tree Of Idleness, Bitter Lemons & The Famous Abbey 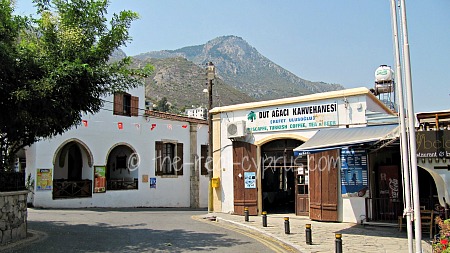 Bellapais Village is in the North of Cyprus and was made famous in the book, Bitter Lemons of Cyprus

by Lawrence Durrell, brother of the equally famous Gerald Durrell, who wrote My Family & Other Animals.

If you have read the book, so named after the poem on the last page, you will be familiar with the Abbey and the Tree Of Idleness.

The following quote from the book explains how the villagers of Bellapais gave rise to the name of the tree...

The Tree Of Idleness these days is also the name of one of the local restaurants, absolutely opposite the abbey.

Sadly you will be hard pressed to even notice there is a tree there, it is all restaurant and not tree so disappointing if you are going to try and find it, having had the vision in your head from the passage in the book. 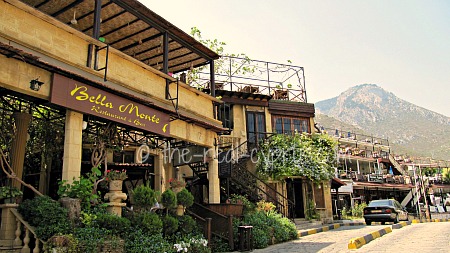 The village itself is lovely, it is not overly hyped and still retains a nice original feel to it, with some reasonable understated souvenir shops and smattering of eating places.

Can't vouch for the food but can advise be careful if you use the taverna next to the abbey, the one with the British phone box in the corner.

We were royally ripped off for drinks there (10 euros for 4 cans of drink) but on reflection, the supposed gifts of water and peanuts perhaps may have been included in the bill even if we didn't ask for them, they were offered.

We were very hot and bothered and more concerned about cooling off so we were not on our guard that day. 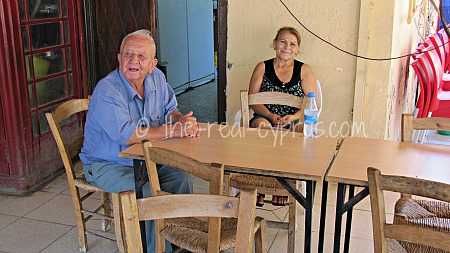 The Dominating Feature Of The Village

Bellapais is home to a most magnificent example of Gothic architecture which is the abbey, and it is quite often called a monastery.

It is considered to be an architectural masterpiece and the most beautiful Gothic building in the near east.

The name apparently is a corrupted form of french for Abbey of Peace, Abbaye de la Paix, so you can see how the name would have evolved over the years.

It is known the original build of the abbey was between 1198 -1205, and much of the present day existence was built during the reign of King Hugh III of France 1267-1284. 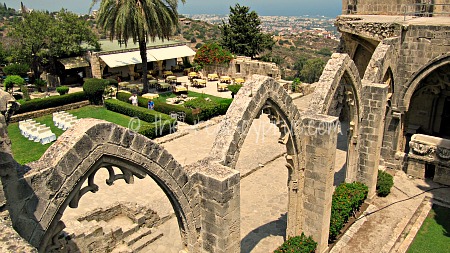 The cloisters and the refectory (like a great hall) were built during the reign of Hugh IV around 1324-1359.

The first people known to have settled there were the Augustinians who had to flee Jerusalem when the city fell in 1187.

A Bit About The Building 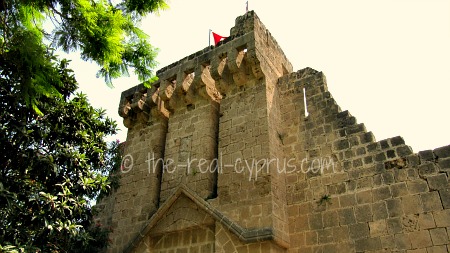 The monastery begins with a gate and the tower on it is a later addition and there is a forecourt through the gate, which is now a garden. 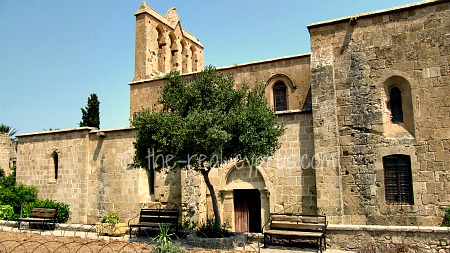 The church, attached is probably the best preserved bit of the abbey and it dates from around the 13th century.

There are some magnificent murals inside and they have survived from about the 15th century.

The forecourt in front of the church leads to the magnificent cloistered area, and there are 18 arches in total, perfectly preserved. 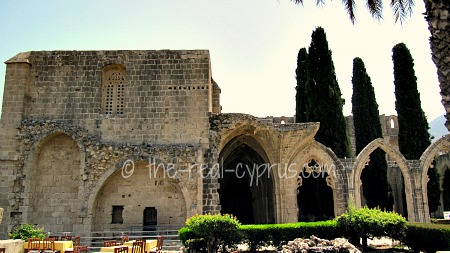 On the other side of the cloisters, the north side, you will have access to the refectory, which is in essence a great hall and you have the most marvellous views down to Kyrenia from here.

It is considered to be the finest room in the monastery, perfectly preserved. 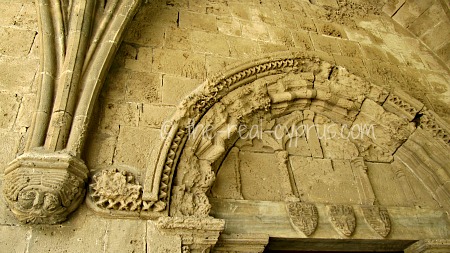 The main door to the refectory has magnificent carvings in it of coats of arms and shows the royal quaterings (I think this means they were in residence) of Cyprus, Jerusalem and the Lusignans. 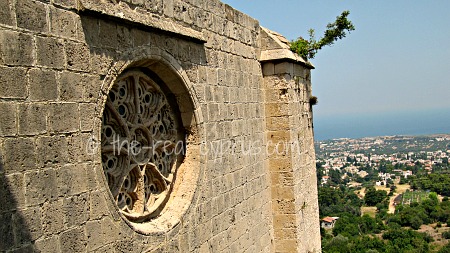 The great room that is the refectory, has a wonderful stone pulpit in it, which was used to speak or give sermon from to the monks during their mealtimes.

There are 6 windows overlooking the port of Kyrenia and the wonderful rose window shown above is at the eastern end of the room, and it is a magnificent specimen of stonework at Bellapais. 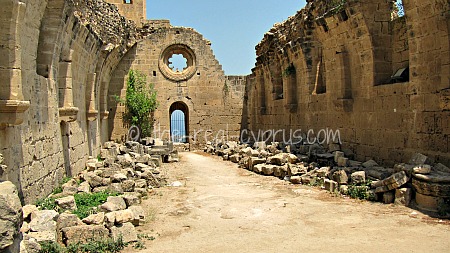 The east side of the cloisters was occupied by 2 work rooms.

One room was an administration office and you can still see interesting Gothic stone carving in this area. 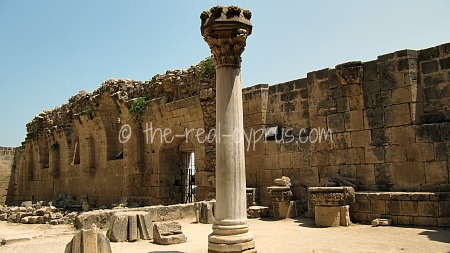 This column, in the second room, I thought had just been placed in the middle, does actually belong there. It is thought to have come from a Byzantine church somewhere else on the island.

No mention of what the room was used for though.

In Addition To Sightseeing 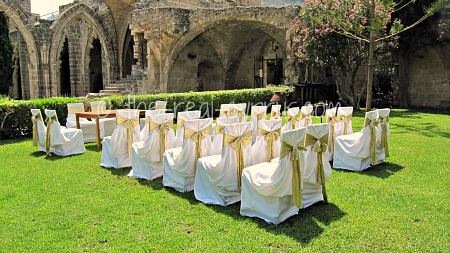 The Abbey is often used for wedding ceremonies, and what a back drop for the wedding pictures!

Concerts are sometimes staged here and plays so check when you are coming, if anything might be on that you could buy tickets for, your local travel agent, or hotel should be able to guide you, or use the trusty internet in advance. 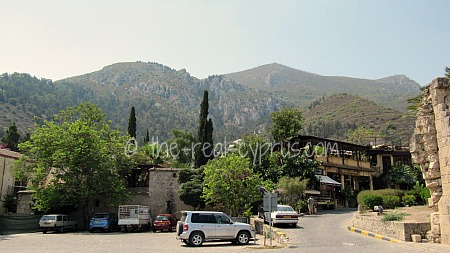 So in conclusion, Bellapais really is a must see on your visit to Northern Cyprus.

The photo opportunities are many so don't forget to bring your camera with you.

If you are coming in the summer months, it can get up to 40 degrees so make sure you have comfortable clothing and footwear.

There don't appear to be any dress rules regarding shorts and ladies having bare shoulders when entering the Abbey, but you might want to cover your shoulders, or wear longer skirts, if YOU feel it is appropropriate.

If you are driving there is a very good car park right by the Abbey, and it costs just a few Turkish Lira, so bring change with you, and something to shade the car and steering wheel, it gets really, really hot!

If you go or you have been to Bellapais, do let us know your thoughts in the Facebook comments area below.